When I think of Samhain I think of Hecate. But who is she?
Hecate is a pre-Olympian Greek goddess who ruled over the realms of earth and fertility issues. She was a goddess of childbirth and was often invoked for rites of puberty. Over time she would become a goddess of magic and socery, a mother goddess and a goddess of ghosts and the spirit world.
Hecate is a goddess of the crossroads and is often symbolized by a spinning wheel. She is often portrayed wearing the keys to the spirit world on her belt, accompanied by a three headed dog and surrounded by torches.
Today many Pagans and Wiccans honor Hecate in her dark goddess form, though it would be incorrect to refer to her as a crone due to her associations with childbirth and maindenhood. Her role as a dark goddess probably derives from her connection to the spirit world, ghosts, the dark of the moon and magic. She is known as a goddess who should not be invoked frivilously or without intent.
Correspondences:
Colors: Black, White and Purple
Stones: Black stones such as jet, onyx, black obsidian, Moonstone, black tourmaline, hematite and smoky quartz
Herbs/Plants: belladonna/nightshade, garlic, mints, mandrake, sandalwood, cypress, myrrh, patchouli, hemlock, wolfbane, azalea, lavender, monkshood, dandelion, Almond, Willow, and funerary trees, especially the yew, alder, and poplar (the yew is associated with immortality).
Hecate is good to invoke for divination, justice, protection, prophecy and self reflection.
Just make sure that you really want the things you ask her for, because she will not hold back. :)
Blessings.
Betsy
Posted by AlphaBetsy at 11:29 p.m. No comments:

Email ThisBlogThis!Share to TwitterShare to FacebookShare to Pinterest
Labels: Goddesses

We did an early Samhain ritual because Samhain is my wedding anniversary, we also honored the full moon and all her glory. 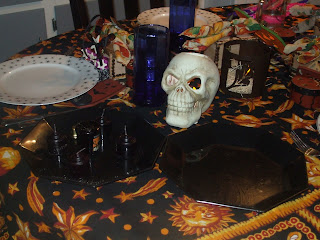 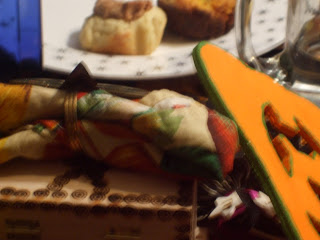 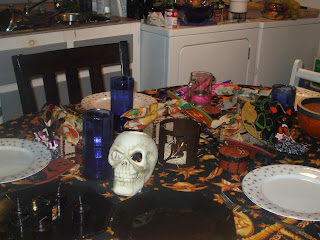 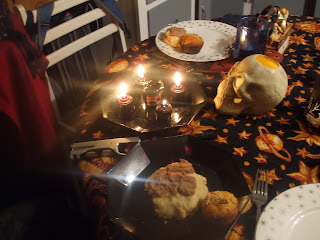 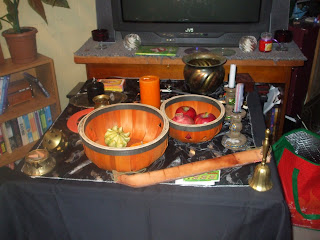 Samhain Altar
Posted by Juniper Lunarsoul at 7:57 a.m. No comments:

Fionah Fae and the Tale of Samhain

Once upon a fall morning, a leaf fell from a tree. It was an old oak
tree, and the tree itself was a home to many forest creatures. The
tree itself was home to one special person, if the truth be told. It
was the home to the small, curious faerie who oft went by the name
Fionah Fae. The leaf that had fallen startled the young faerie by
landing, plop, right on top of her head. A giggle shattered the
silence of the forest, and Fionah Fae pulled the leaf over her tiny
body. She had been in deep conversation with one of the squirrels who
lived in the same tree as herself, and the leaf had certainty
disturbed the conversation!

"I suppose this means Samhain is coming soon," the squirrel stated to
the young girl.

Now, for those of you who know Fionah Fae, the next question was an
obvious one. "What is Samhain?"

"Well," the squirrel thought for a moment. "It means the end of
summer is here, and winter will be starting soon. This is the time of
year we prepare for the cold season ahead. And the time of year when
I should be getting as many nuts and acorns as I can!" With that last
remark the squirrel scampered away, calling over her shoulder only to
add that the young faerie should seek out the Goddess to find out
more.

Fionah sat under the leaf for a minute longer, thinking to herself.
She'd sought out the God and Goddess before to find out about Imbolc,
and Summer Solstice, and even Yule. Each trip had been long, but in
the end she had learned a lot, and had even had fun. And besides,
Squirrel hadn't finished explaining just what Samhain was. So Fionah
fetched her warm fall jacket, and her warm scarf, and set off,
properly dressed for the weather, to find the Goddess and learn more
about Samhain.

Fionah Fae set off through the forest, looking for the Goddess so she
could find an answer to her questions. She played in the falling
leaves, and danced over the tops of mushrooms. She stopped for tea
with a badger, and then continued her journey. After spending hours
searching for the Goddess, she came across a pumpkin patch, and
gently flew higher, until she could see the whole of the patch. And
there, standing in the middle, was a tall, beautiful woman. Her skin
was a deeply tanned brown, and her hair fell in waves of yellow,
orange, red, and brown. The young faerie didn't need to ask who the
woman in the field was, knowing right away that it was the Goddess
she had been searching for.

A smile lit the young girls lips as she hurried across the field to
stand next to the Goddess. "Mother Goddess," Fionah smiled up at the
woman. "I've come to ask you some questions if I may?" After so many
times of speaking to the Gods, Fionah Fae found she wasn't quite so
shy with them anymore, and came right to the point.

The Goddess laughed softly, and nodded. "Of course you may, Fionah."
They made a place amongst the pumpkins to sit down, and the Goddess
smiled gently. "Judging by the time of year, I will assume you're
here to ask me about Samhain. Am I correct little one?"

"You are! Squirrel said it was the end of summer, and a time for her
to gather food for winter, but she said you could tell me more."

"She was right, Fionah. Samhain is a celebration of the harvest. The
harvest being the food we gather for winter. But that is not the
whole of the celebration, little one. Samhain is also a time when we
honour our family that has passed on. Perhaps a grandparent, or a
parent, even a sister or brother, or even a loved pet. Anyone in our
family that has passed on we honour at this time. We can also try to
speak with them, and ask for their help with things in our life, or
for advice. Some people call this night Halloween, and dress up in
costumes. We do this to scare away bad energy, or bad creatures. But
this is one celebration we usually celebrate with a feast, and with
fun and games."

Fionah Fae nodded her little head and thought about all of the
information that the Goddess had just told her. There was a lot of
it! "So, how do we celebrate it then?"

The Goddess laughed, and gently kissed the top of Fionah's
head. "Well, for starters, we get dressed up as whatever we want, be
it a princess or a monster. We can play games, or some people 'trick-
or-treat'. That is when they go house to house asking for treats.
Then we have a large feast, and invite the spirits of our ancestors
to join us." There was a small pause as the Goddess looked at
Fionah. "Would you like to join me in a small celebration?"

"Oh yes, Goddess!" the young faerie smiled, happy to be invited to
join in.

"Well then, child, we shall set the feast out." With that, the
Goddess spread a large picnic blanket out, and set three places,
filling each places plate with a large amount of food, and each cup
with a fruit punch.

"Why is there three plates when there is only the two of us?" Fionah
Fae asked.

"That last place is for our ancestors, whom we invite to join us
tonight." was the kind answer Fionah recieved. The young girl nodded
to show she understood, then seated herself next to the Goddess.

"We give thanks for the harvest we have had this summer, and welcome
the coming winter. We give thanks and blessings to those who have
gone before so we could be here today." The Goddess and faerie spoke
together, smiling. "We ask for our ancestors to join us if they wish
to, to give us their blessings in the years to come. The old has
died, but new birth will come. As the days will become shorter, and
the nights become longer, we pray for peace and happiness for friends
and loved ones." As the last words died away the two ate their feast,
and laughed.

When they were done Fionah Fae smiled, and took some of the juice and
food to share with the nature spirits, by pouring some of the juice
under a tree, and gently placing the food she had taken on the ground.

"Thank you, Goddess, for teaching me about Samhain." the young faerie
smiled, and the Goddess smiled in return.

Our little community was born in the Craftster forum through swaps of handmade goods within a Pagn/Wiccan/Witchy theme, following the Wheel of the Year's holidays.
Accepting peoples from any ages gender, race, orientation, beliefs and experience in the craft, we are a positive group that helps and supports each other through good weather and bad with respect for life and for one's self.
We highly value the process of making practical and decorative things by hand. Creating is for us a blessing, a lifestyle as well as a way to get in touch with what's best inside ourselves.

Please enjoy your trip wihtin our handmade creations and personal reflexion about the (different) path we have chosen.

You're a craftster.org user and often participate in the WWP swaps?
Or you are a really, really crafty witch longing to share your knowledge?
or perhaps you're both?

send an email to craftstercoven@gmail.com with your real name, craftster username (or blog address if you're not in craftster) and what you're willing to do to help!