Fear of the DARK 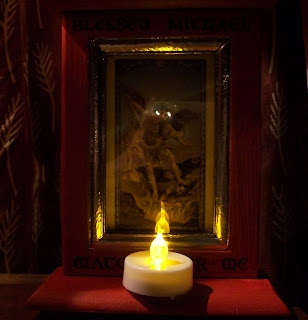 This is in response to a post on gogosummer's blog New Moon Summer, about fear of the dark. It's something that many of us have to one degree or another, and after commenting on Summer's blog that she might want to invoke a spiritual guardian like St. Michael or Kwan Yin to guard over her while she slept, I decided to make a little protective shrine for exactly that purpose.

The Archangel Michael is one of those entities whose spirit moves across many religions. He is invoked by Protestants, Catholics, Jews, Muslims, Pagans, Witches and many others in between. Universally seen as a helper and protector, he is the original "guardian angel" and is always willing to help when asked. A tiny bedroom shrine is the perfect way to request his protection from the unseen dangers that lurk in the dark while we sleep. 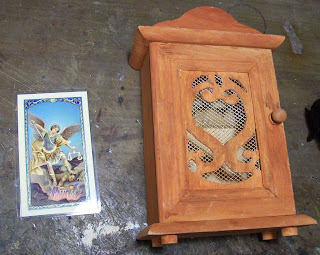 I started with a Roman Catholic holy card of St. Michael, which I got when I visited my mother the last time. Cards like this are available from Catholic gift stores, some churches (the Roman Catholic cathedral church in many cities is often dedicated to St. Michael), metaphysical shops, botanicas selling spiritual supplies for Hoodoo, Santeria, Voodoo and other African diaspora religions, and many online stores. (My local metaphysical shop literally can't keep St. Michael images in stock because they sell out almost as soon as the shipment arrives.) For the shrine case I was going to buy a plain wooden box at the dollar store, but I couldn't find anything the right size. I could have made it out of foamcore (a great material for these because it's so lightweight) but instead I decided to adapt something I already had, a miniature cabinet which was ugly and the wrong shape, but exactly the right dimensions. 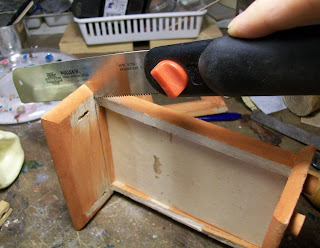 A bit of work with a small saw and chisel removed the extraneous bits and reduced the depth of the box down to only 1/4 inch inside. (I left the base the original width so it can hold a candle.) I pulled out the misshapen fretwork and metal mesh in the face and cut a piece of glass from an old picture frame to replace it.

Red and blue seem like good St. Michael colours (and red is a traditional colour for shrines, especially in Asia), with of silver trim seemed to invoke his protective sword. I tried painting it with metallic silver acrylic paint, but it didn't seem very sharp, so I used aluminum tape instead, which was much better. 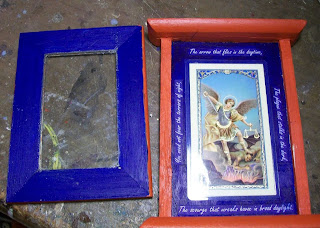 After positioning the picture carefully so it will show in the window, I added four lines from Psalm 91 of the Old Testament around it:


You need not fear the terrors of night,
The arrow that flies in the daytime,
The plague that stalks in the dark,
The scourge that wreaks havoc in daylight.

Some Pagans are uncomfortable with the use of Bible verses in spells, but there's a long tradition of it in both European and American magic. I see the Book of Psalms of the Old Testament as really just a collection of ancient Jewish spells and charms whose effectiveness has been enhanced by thousands of years of use. (The classic text on the subject is Godfrey Selig's 18th c. book The Secrets of the Psalms.) 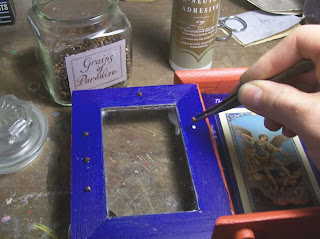 On the front frame I wrote my petition, "Blessed Michael, watch over me." (Unfortunately I forgot that there would be a candle in front of it, )  Inside the front, around the back of the window, I glued seven grains of paradise. Grain of paradise is an African pepper-like spice whose use in European cooking is long forgotten but remains in use in American Hoodoo magic, and adding it to "activate" St. Michael images is one of its uses. (Seven is a good number for protective magic.) The grains of paradise and the Psalm will be hidden when the front is closed, but they don't need to be visible to work. 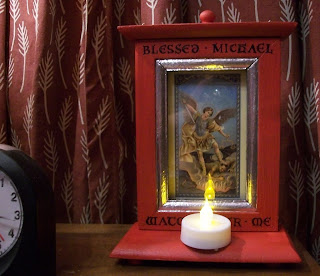 Finally, I added a battery-powered tealight in front of it. These little electric flicker-candles are safe to leave burning beside your bed all night, and they're a lot less bright than a real candle, so make better night-lights. The finished shrine can be anointed with some sort of Protection Oil, and set up beside (or above) one's bed.

Instead of St. Michael, a little shrine to Kwan Yin would be equally beneficial for protection from night fears. In that case I would make the inside white instead of blue, and perhaps decorate it with tiny pearls. A small incense burner would be a good addition, too. There are some lovely prayers to Kwan Yin here.

I tend to want to learn all the crafts there is. When I see something I would like to have (buy) I always ask myself first if I could make it myself. So far I know how to sew, knit, crochet, pottery, embroidery, make candles and randomly use mixed media and up-cycle things. It's a big part of who I am and what I do; I'm crafty. Afterwards, I have the reward of using it and be proud of myself for making a useful/pretty thing. 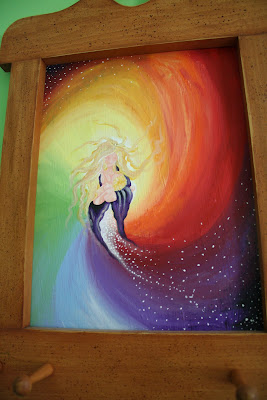 When it comes to Witchcraft, there's no exception. The good intentions and energies you put into making something will last forever (or is easily renewed!). The object and its purpose are glorified; it makes them even more powerful. There's something so good about knowing every step of making something, knowing every components and technique used. So make your own altar cloths, make you own candles and incenses; find second-hands stuff and edit them to be your very own. Don't be scared to draw and paint on your tools; favourite animals, favourite runes, phrases and words. Carve symbols on your candles if you can't make them from scratch. It probably won't be perfect, but sometime (most of the time) imperfect is 10 times better.
Posted by Andréann at 9:54 p.m. 2 comments:

Email ThisBlogThis!Share to TwitterShare to FacebookShare to Pinterest
Labels: Craft With the years, I'm starting to understand the true essence of Imbolc. We are far from having daffodil sprouting around; the land is still well covered by feets of snow, and will remain that way until late March; then the land will remain frozen for another month. But the Wheel has turned, and time has past. Spring, like always, is coming. We've decorated our altar with simple symbols. I tried to make an hedgehog... but I think I failed! In my attempt to simplify, I turned a catholic sierge into a Bridig's one by drawing her on a piece of construction paper. The same material was used to make the cross. I just couldn't take out the books about snow and winter yet, as we are still in the middle of it!
Posted by Andréann at 7:50 p.m. No comments:

Our little community was born in the Craftster forum through swaps of handmade goods within a Pagn/Wiccan/Witchy theme, following the Wheel of the Year's holidays.
Accepting peoples from any ages gender, race, orientation, beliefs and experience in the craft, we are a positive group that helps and supports each other through good weather and bad with respect for life and for one's self.
We highly value the process of making practical and decorative things by hand. Creating is for us a blessing, a lifestyle as well as a way to get in touch with what's best inside ourselves.

Please enjoy your trip wihtin our handmade creations and personal reflexion about the (different) path we have chosen.

You're a craftster.org user and often participate in the WWP swaps?
Or you are a really, really crafty witch longing to share your knowledge?
or perhaps you're both?

send an email to craftstercoven@gmail.com with your real name, craftster username (or blog address if you're not in craftster) and what you're willing to do to help!